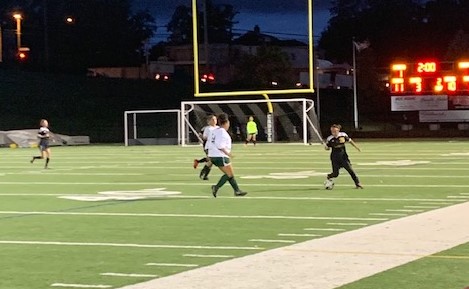 Following a first half that saw many chances for the Cadets girls jv soccer team to score, sophomore Kat Remsberg would finally break a scoreless tie with South Hagerstown.

With 18:43 to play in the 2nd half Remsberg would break away on her own towards the Rebel goal. Following her first shot attempt which was rejected by South’s goalkeeper, Remsberg collected her own rebound and fired the ball from an almost impossible angle into the left side of the net for the score.

The goal was one of many firsts for FHS, not only was it Remsberg’s first of the year but also Frederick’s and the Cadets would hold on to the 1-0 lead and collect their first victory of 2019.

Sui Sung was great in goal for FHS, the freshman turned away all 5 shots she faces from the Rebels.