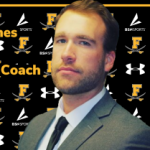 Riesmeyer comes to Frederick High School after spending one year as an assistant coach/defensive coordinator for the Chatham University men’s lacrosse team. Before Chatham University, he spent five seasons as the Assistant Coach for the Men’s Lacrosse team at Saint Vincent College in Latrobe, PA. During his tenure, at Saint Vincent College, Riesmeyer held numerous responsibilities such as recruiting coordinator, individual player development, equipment manager, academic advisor, goalie/defensive coach, and game film break downs. His efforts, both on and off the field, helped propel the men’s team to Conference Playoffs in 2015, 2017, 2018, & 2019. Three of those years ended as Conference Championship Runner-ups which were, 2015, 2017, & 2018.

In December of 2018, Coach Riesmeyer was selected to be a presenter at the IMLCA College Coaching Convention. His presentation focused on “Coaching Differentiated Strategies.” The purpose of his lecture was to educate coaches on a variety of teaching techniques and strategies that they could implement to help their players achieve a higher retention of information. Coach Riesmeyer was among 30 speakers but the only D3 assistant coach to be given a solo presentation.

Prior to beginning his college coaching career at Saint Vincent College, Riesmeyer spent one season at Bethel Park High School (Pa.) as their varsity defensive coordinator. His defensive mindset and teacher like coaching style helped Bethel Park obtain the “lowest goal against,” in the W.I.P.L.A, of 7.7 GA per game. This ultimately helped the team achieve their second consecutive playoff run in 2014.

Before beginning his college coaching career, Riesmeyer started up Apex Lacrosse LLC and resurrected the Allegheny Keystone State team. Both programs are competitive travel lacrosse teams based solely out of the Pittsburgh area. In the summer of 2016, Coach Riesmeyer helped the Keystone team lock up their bronze medal which ended the Keystone State Games drought after nearly eight long years. On top of this, Riesmeyer’s Apex Lacrosse Club has helped 38 former Apex players land college roster spots over the past 4 years.
Riesmeyer is a 2014 graduate of Saint Vincent College with a Bachelor’s degree in Business Administration and a K-12 Teaching Certification (Pa.). Soon after, in 2017, he would obtain a Master’s degree in Management & Operational Excellence. Coach Risemeyer will be teaching at West Frederick Middle School in the 2020-2021 school year.