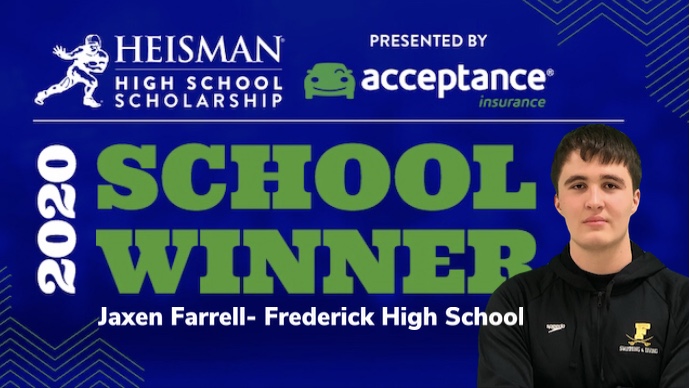 Senior Jaxen Farrell was informed Monday morning by the The Heisman Trophy Trust that she he been named Frederick High School’s 2020 a School Winner for the Heisman High School Scholarship presented by Acceptance Insurance. He will now move on for the chance to become Maryland’s State Winner. State Winners will be announced at heismanscholarship.com on Tuesday, November 3.

The Heisman® High School Scholarship is presented by Acceptance Insurance®. The program was created in 1994 through a partnership between Wendy’s® and The Heisman Trophy Trust. From its inception, the program has leveraged the reputation of the Heisman Memorial Trophy as a symbol of great ability combined with diligence, perseverance, and hard work.

The Heisman High School Scholarship program extends the Heisman prestige to the nation’s most esteemed high school seniors by celebrating and rewarding outstanding male and female scholar-athletes who understand that the most important victories happen not only on the field, but also in their schools and communities. The Heisman Trophy Trust was proud to partner with Acceptance Insurance® in 2020 to present these prestigious scholarships.

Over the past 26 years, the program has honored more than 600,000 of the nation’s most esteemed high school seniors and provided hundreds of thousands of dollars in college scholarships to students and more than a million dollars to high school academic and athletic programs across the country.

The Heisman High School Scholarship program honors the nation’s most accomplished, community-minded high school senior athletes. By inviting male and female students from schools across the country to share their stories of leadership and impact, the program aims to inspire all students to harness their potential, push their limits, and use their talents not only to advance their own futures, but to improve the communities and world around them.