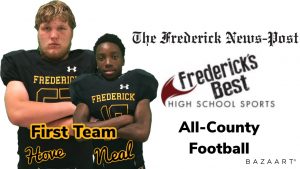 Hove started all 9 of the Cadets on field games this season at right tackle and proved to be one of the most formidable run blockers in the area.

Neal recorded 22 tackles, with 12 pass breakups, and 4 interception from his cornerback position during his rookie season this fall. His 54 yard interception return for a touchdown against Linganore in the playoffs proved his legitimacy as of the areas top cover corners.

Sophomore linebacker Cory Core was named to the All-County second team as was quarterback Kisaye Barnes.