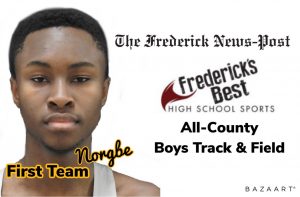 The paper released on Monday that Gerald Norgbe was named to the First Team. Norgbe who will be attending the University of Maryland in the fall, won County, Central Maryland Conference, and Regional triple jump crowns on his way to a state title. His jump of 47 feet at the State Championship is second all time for a Cadet, only 1998 alum Keith Jenkins who jumped 49.6 in the spring of 98’ has flown farther.