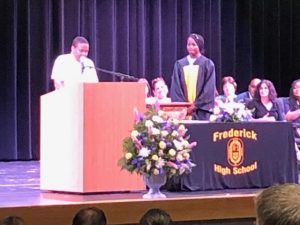 Seniors Makayla Daniels and Gerald Norgbe were named the FHS Class of 2019’s Outstanding Senior Athletes.  The two were awarded plaques for their achievement and the annual seniors awards & recognition ceremony held Thursday afternoon. Their pictures will hang in the athletic wing of FHS with past winners of the award.

Daniels played four years of varsity basketball while at FHS, she is a three time state champion who leaves Frederick as the schools all-time leader in points scored, three pointers made, and steals. She was named All-County Player of the Year by The Frederick News-Post three years in a row.  This past year she earned USA Today- All Maryland First Team honors and was named Maryland’s Miss Basketball. She will be attending and playing basketball at the University of Arkansas

Norgbe, was a member of Frederick’s soccer and track teams. Last month he was named Frederick High School’s Senior Scholar Athlete. In 2017 he was a member of FHS’s CMC Champion soccer team. A first team All-CMC Spires division selection this fall, Gerald is also the county and regional champion in the triple jump.  He will compete this weekend for the state triple jump title. Norgbe will be attending the University of Maryland.